Readings
Ezekiel 37: 1-14
Ezekiel’s prophesy of restoration in which he sees a valley of dry bones, and is called by God to prophesy that the bones come together and be clothed again in flesh, and then that the wind/breath/Spirit blow into them and bring them alive. In this way, he proclaims, God will bring life and restoration to God’s exiled people.

Ezekiel’s words offer a prophesy of hope and restoration, where a valley of dry bones come together and are clothed again in flesh. The ruach (the Hebrew word for wind/breath/Spirit) blows into them and brings them to life again. Ruach is an active word and implies the wind/breath/Spirit rushes through the dry bones to fill them. In this way, God through Ezekiel offers new life and restoration to God’s people.
Ezekiel reminds us when all else seems to fail us, there is always hope, that spring will come, rain will fall, new life will grow from the old and the Spirit of God will flow in and around us.
(Source: Elizabeth Raine)

Psalm 130
A plea for mercy to God, with assurance that God does not keep a record of sins, but forgives, restores and rescues.

This week’s Psalm is a lament. The writer sees himself as sitting symbolically in darkness, waiting for the comforting presence of God, which will come like the morning light. It could have been written for a time such as we face at the moment (COVID-19. The psalmist offers us hope, in that the love of God will always be with us. (comment by Elizabeth Raine)

Romans 8: 6-11
God’s Spirit, and the spiritual attitude that it nurtures, leads to life, and will enliven us not just in our spirits, but in our bodies as well.
John 11: 1-45
Jesus, on hearing of Lazarus’ illness, returns after a short delay, to Judea, risking his own death, in order to raise Lazarus. After proclaiming himself as “the resurrection and the life” he raises Lazarus, and many people believe in him as a result.
(Summaries by John van de Laar, Sacredise)
Readings in A4 double sided format COCU23A.Lent5A.ReadingsA4.2020

Pilgrim’s ‘online’ service in 2020 (due to COVID19) – Order of Service to follow along with the online service, Sunday 29th, 10am COCU23A.2020
(feel free to adapt if it’s helpful to use in your own local context, using music familiar to you)

This week, the lectionary offers us the death of Lazarus and Ezekiel’s valley of dry bones. While these texts aren’t filled with hope and comfort, I think the lectionary is inviting us to truly grieve all that is lost in this global crisis. We have lost jobs, income, childcare, social gatherings, school years, graduations, health, predictability, routines, connection. Some of us have lost loved ones. We have all lost life as we once knew it. There is so much to grieve. And Jesus weeps with us. If you are preaching from these texts this week, this article, “That Discomfort You’re Feeling is Grief,” (from the Harvard Business Review) may be helpful in naming the collective grief we are experiencing right now. It also identifies a 6th stage of grief: meaning. This Lent, worship can be a space where we release and process our grief – and also make meaning of it with the promise that God holds us with care. Even in our grief and struggle, we remember that the wilderness is a place of new life, of resilient Life.
(Source: Sarah Are, Sanctified Art)

Ann Siddall reflections (in the context of COVID19), ‘Finding peace and strength within us’.

In once full arms
I hold a wreck of sorrow.
I am ruined.
And you, Beloved,
you who see
to the bones
of my heart,
you who stride waves,
who order winds
and shame demons,
you to whose authority
the universe bows,
you stand
not apart
from this grave darkness
but here
in the pit of me,
and wield your greatest power,
calling forth,
bringing light
up out of the terrible depths,
commanding life itself
with the one force
to revive me,
the heart of God outpoured:
with me, in me
you weep.
I am unbound.
(Source: Steve Garnaas-Holmes, Unfolding Light)

In John’s gospel, Jesus’s friend, Lazarus, died.
Lazarus lay in a tomb.
In our world today, many are entombed in isolation,
and too many have died.
In the shortest verse in the bible, Jesus wept.
The gospel of John paints
Jesus weeping for his friend, Lazarus.
In these days on our planet, Jesus weeps,
for the death and disease,
the distance and isolation,
the stresses and tensions.
We pray for all those who are sick,
who suffer,
who grieve.
for all those in front line positions
for all those affected economically, socially, mentally, physically, vocationally and spiritually.
The gospel promise is newness and hope,
is resurrection,
is life.
May the world know the peace of this promise.
May the promise come soon.
(Source: Diaconal Minister Ted Dodd, United Church of Canada)

Elements of worship for Easter 5A (a compilation) Worship elements 5A

To these dry human bones, the Lord God says:
I shall cause breath to enter you, and you shall live.
We wait for the Lord,
and in God’s word we place our hope.
The Lord says: I will raise you up from your graves,
And you shall know that I am the living Lord.
Come to us, O Lord.
Open up the tombs of fear and ignorance that imprison us
Fill us with your spirit
And we will live again.
May the peace of the Lord be with all of you.
(Source: Elizabeth Raine)

God said to me, “Mortal, can these bones live?” I answered, “O Lord God, you know.”
Then God said to me, “Prophesy to these bones, and say to them: O dry bones, hear the word of the Lord. Thus says the Lord God to these bones: I will cause breath to enter you, and you shall live.” (Ezekiel 37.3-5)
There are parts of you,
maybe great parts,
that have withered and died.
Maybe spiritual gifts that you have buried,
a face of yourself you have closeted,
wounds ignored, hopes starved.
Some have passed on, forever.
But some, God may breathe life into.
God may bring bone to bone and sinew to sinew.
You may be aware of it; a daily ache.
Or it may be unknown to you,
a hidden mystery.
What part of you is God bringing back to life?
Where is God’s breath blowing,
the dry bones moving?
Don’t direct the wind.
Don’t even worry where it is.
Just prophesy to the dry bones.
Speak hope.
Be open to the miracle.
Let God breathe, and wait.
(Source: Steve Garnaas-Holmes, Unfolding Light)

When Lazarus heard his name
he took a sudden breath.
With visceral trembling blood resurged.
But then, as when awakening some days,
he lay a moment, mired,
reluctant to rise from the familiar
swaddling of his death
Rising, even more than dying,
there could be no return:
for if he chose to stand,
all he knew would then be lost
And still now every morning,
each momentary wish for healing
is a risk, a wakening call
to change, to choose,
to leave so much behind,
and be again made new.
(Source: Steve Garnaas-Holmes, Unfolding Light, 1996)

Here’s a fabulous story on a congregation that saw themselves as the ‘living stones’ rather than a building: ‘The church is not the building. It is our faith and the people’. Full text below (scroll down) – would make a great story to tell as part of a sermon. 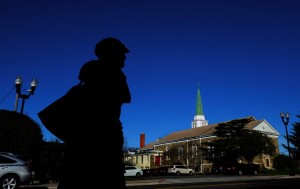 Rev Sandy Boyce is a Uniting Church in Australia Minister (Deacon). This blog may be a help to people planning worship services.
View all posts by admin →
This entry was posted in Year A. Bookmark the permalink.