deflating balloons – a symbol for Prayers for Others

Bishops in the Philippines used yellow balloons to make the point about promises from politicians (full story below) which are not delivered, and which only favour the elite at the expense of the poor. Providing a deflated balloon to people during Prayers for Others could provide a very powerful way to focus prayers on empty promises to the most vulnerable and disadvantaged in our global community.
For the Filipino people, any development that Pres. Aquino is boasting about seems like balloons of hot air that could be deflated anytime because they are not meant to redeem the people from quagmire of poverty, economic agony and social injustice. Equally it could apply to many other countries where ‘political spin’ and promises raise hope, only to be deflated when they are not delivered and realized. 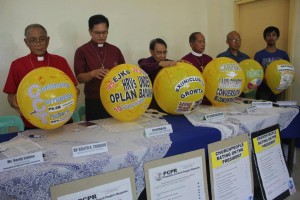 Manila,Philippines – In a symbolic rite, the church people led by Bishops Solito Toquero, Elmer Bolocon, Arthur Asi, Ephraim Fajutaga, Rev.Fr. Jess Dumual, MSC, Nardy Sabino and Jophet Domingo deflated the yellow balloons with red taints. This act demonstrates how Pres. Benigno Aquino III has failed to deliver the promises to the Filipino people. He did not only fail in his promises, but aggravated the sufferings of the many. The President who has only favored the minority rich is getting ready for SONA come July 23.

All the developments, GNP growth and reforms that President Aquino is boasting about are not without sacrifice and sufferings of the most exploited and oppressed people of the land. Likewise all those improvements and changes have only benefited the tiniest section of the population-the billionaires, the ruling elites and the foreign big capitalists.

All the “yellow” promises are tainted with blood- the sacrifice of the many and even the killings of those whose lives are offered for justice and peace.

Many of the poor ones have reached into a level of substandard living. The workers are into a situation of slavery- with no assurance if they could find a source of income the next day or if they are able to feed their families. The farmers are still in a wishful state for the fulfillment of the agrarian reform .The families have to separate in order for the adult members to earn a living in other countries . The litany of woes of the impoverished is endless while the strings of merriment for the billionaires and elite seem to be perpetual. Likewise, our sovereignty is surrendered through the servitude of the President to US economic and war agenda by opening up our shores, land and people for military exercises and agenda in the Asia Pacific. If that is not servility, how else it be called? In the same intention, the EO 79 is but selling out of our natural resources and patrimony for business interest.

Yellow promises tainted with blood. The yellow balloons symbolize the empty promises unmasking Pres. Aquino’s real agenda of serving the interest of the ruling elite. For the Filipino people, any development that Pres. Aquino is boasting about seems like balloons of hot air that could be deflated anytime because they are not meant to redeem the people from quagmire of poverty, economic agony and social injustice.

Rev Sandy Boyce is a Uniting Church in Australia Minister (Deacon). This blog may be a help to people planning worship services.
View all posts by admin →
This entry was posted in Prayers for others. Bookmark the permalink.