The 2016 Olympic Games will kick off on August 5 in Rio de Janeiro, Brazil. The 28th edition of the Games will see 10,500 athletes from 206 National Olympic Committees competing for 306 sets of medals in 28 disciplines. With the start of the Rio Olympics, there may be a number of ways in which this event may be a focus for prayers in worship. (This page is a work in progress). 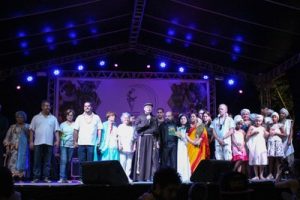 Representatives from over 25 faith expressions and from more than 30 civil society organizations gathered for a public event on August 1st, in downtown Rio de Janeiro, Brazil, in the lead up to the opening of the 2016 Olympic games to affirm the dignity of human beings and the planet Earth and the defense of human rights. The concept of the vigil was developed by an international group that included representatives from the World Council of Churches (WCC), the Peoples’ Movement for Human Rights Learning (PDHRE) and other international organizations.
At the vigil, prayers were led by faith leaders, and statements delivered by representatives of civil society organizations were interwoven with cultural performances from indigenous people, quilombola and other Afro-descendants.
“We are here to enable full visibility to migrants, refugees, indigenous people, and representatives of minorities who suffer all forms of discrimination and racism. Their urgent need for justice should also inspire the Olympic values that are being hailed so loudly during these days here in Rio. We are here to show that we will continue to walk with those who struggle to stop the endless exploitation of the planet’s resources and to proclaim our hope for a new world, where children and elderly people will have access to the necessary conditions to live their lives with dignity, where health, education, sport, culture, leisure and basic sanitation are not a privilege of a few”. (Rafael Soares de Oliveira, executive director of Koinonia/ACT Alliance and local coordinator of the vigil).
At Morro da Mangueira, one of Rio’s main favelas, a symbolic Torch of Dignity is on display during the Olympics. “The Torch of Dignity is a way to promote human dignity and human rights as a way of life. From a Christian ethical point of view, human dignity is the pre-eminent concept, founded on the faith principle of all people being created equal in God’s image (imago dei). From an ecumenical Christian perspective, human rights law and its related mechanisms are tools for promoting and protecting the pre-eminent value of God-given human dignity. Human dignity is also the foundational purpose and objective of the 2030 Sustainable Development Agenda.” (Rudelmar Bueno de Faria, WCC’s representative to the United Nations in New York City). Besides Rio, “Torch of Dignity” events were organized in other parts of the world, such as India, Costa Rica, Bangladesh and Argentina.

Pope Francis (August 2016) on the Olympics
Speaking in Portuguese at his weekly general audience yesterday, Francis offered special prayers and greetings to the people of Rio and to the athletes and fans who will gather in the Brazilian city for the games starting tomorrow.
“In a world thirsting for peace, tolerance, and reconciliation,” he said, “I wish that the spirit of the Olympic Games would inspire all – participants and spectators – to fight ‘the good fight’ and end the race together, desiring as a prize not a medal, but something much more precious: The creation of a civilisation where there reigns solidarity founded on the recognition that we are all members of one human family, no matter the differences of culture, skin colour, or religion.”
In view of the Olympics, the Pope’s prayer intention for August was: “That sports may be an opportunity for friendly encounters between peoples and may contribute to peace in the world.”
(Source: Catholic News, August 4th 2016)

Resources prepared for London Olympics by the Church of England.

A prayer before a competitive event
Almighty God,
you created humanity in your image
and delight in our talent, skill and flair:
give us grace to celebrate
the achievements of our fellow men and women. Give determination and equity to competitors, gratitude and charm to winners,
grace and mercy to those who do not come first, and thankfulness and admiration to observers; that in all our best efforts
your creation may be glorified. Amen.

The following is suitable for use as an ending to The Prayers or as a liturgical ending to A Service of the Word.

Though many, we form one body in Christ.
We belong to one another.
By God’s grace we have different gifts.
We will use them in faith.
Rejoice in hope, stand firm in trouble, be constant in prayer.
Filled with his Spirit we will serve the Lord.
(Source: Action and movement, Words for dedication p. 285 New Patterns for Worship, 2002)

A prayer for the Olympic Games
Eternal God,
Giver of joy and source of all strength,
we pray for those who have prepared for the Olympic and Paralympic games.
For the competitors who have trained for the Games and their loved ones,
For the many thousands who will support them,
And for the Churches and others who are organising special events and who will welcome many people from many nations.
In a world where many are rejected and abused,
we pray for a spirit
of tolerance and acceptance, of humility and respect
and for the health and safety of all.
May we at the last be led towards the love of Christ who is more than gold, today and forever. Amen
(Source: Church of England 2011/adapted)

Some creative ideas for worship around a sports theme.

Seven Things the Olympics Have in Common with Ignatian Spirituality by Denise Gorss. Some of the examples stretch the point, but could be good talking points in a sermon.

Rio 2016 Olympics: The Exclusion Games
Since Rio de Janeiro was announced as the 2016 Olympics host, the mainstream media, politicians and several analysts have been emphasizing the opportunities from investment growth in the city, highlighting the possibilities in solving large problems such as those in urban mobility and the recovery of degraded spaces for housing, commerce and tourism, as in the case of the harbour area. For the population of the city, however, it is clear that the promised benefits will not be realised. When looking at the city’s preparation process for the Olympics, it is possible to assert, disappointingly, Rio 2016 Olympics: the exclusion games!
Table of contents:
1. Housing
2. Urban Mobility: transportation revolution for whom?
3. Work: informal trade repression and slavery practices in formal work
4. Sports: where is the Olympic legacy?
5. Environment: contradictions on the Olympic environmental discourse
6. Public Safety: The Olympics, militarization and racism
7. Gender: Women’s protagonism in popular struggles in the city of Rio de Janeiro
8. Children and Adolescents: conditions of vulnerability and violence
9. Information and Budget: obscure games
10. Resistance Initiatives of the World Cup and Olympics Popular Committee
11. Proposals of the World Cup and Olympics Popular Committee: for a city to all people, with social justice and democracy
Downloadable PDF here (could frame prayers for others)

Amnesty statement about the Olympics: Has Brazil lost even before the Olympics has begun?

Also, The Real Cost of the Olympic Games.
‘Our quarrel is not with the Olympics, our quarrel is this: The mayor sold something he had no right to sell. The Brazilian government always ends up serving the ruling class … It is high time for public policies to treat the people who truly build the country with respect. We are poor because we live in a capitalist society, but we must still be consulted [and] must be treated with respect.’

Rio’s Muslim community call for peace ahead of 2016 Rio Games.

Rev Sandy Boyce is a Uniting Church in Australia Minister (Deacon). This blog may be a help to people planning worship services.
View all posts by admin →
This entry was posted in Olympic Games, Special Events. Bookmark the permalink.