19 November is World Toilet Day. This international day of action aims to break the taboo around toilets and draw attention to the global sanitation challenge. Can you imagine not having a toilet? Can you imagine not having privacy when you need to relieve yourself? Although unthinkable for those living in wealthy parts of the world, this is a harsh reality for many – in fact, one in three people on this globe does not have access to a toilet!

The WTD 2019 theme, “Leaving No One Behind,” emphasizes the importance of expanding sanitation access to the more than 4.2 billion people living without safely managed sanitation options.

A hymn for World Toilet Day, by Carolyn Winfrey Gillette, commissioned by World Council of Churches (clearer image on the website here). 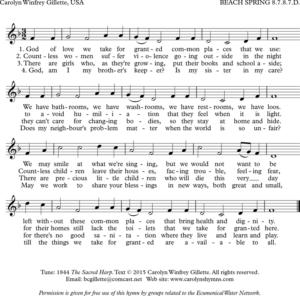 A hymn for World Toilet Day

A prayer (source: World Council of Churches)
Lord, we remember in our prayers the billions of people around the world, particularly from Africa and Asia, who do not have access to safe sanitation facilities and thereby have to face illness, humiliation and even death. Lord, we pray that they may have access to a dignified life by getting access to adequate means of sanitation facilities. Lord, in your mercy, Hear our prayer.
Lord, with other people of goodwill, help us to provide better sanitation facilities with good hygiene that can reduce deaths caused by diseases related to diarrhoea. Empower us to achieve universal access to water and sanitation latest by 2030 (as per the UN Sustainable Development Goals). To this end, bless the Ecumenical Water Network of the WCC, so that it may be instrumental in achieving this goal. Lord in your mercy,
Hear our prayer. Amen.

Information
A former minister of environment from India describes India as the “largest open-air toilet in the world”. In India alone 680 million people openly defecate. The new Prime Minister of India recently made it mandatory that within a year, that each school in India must have at least two “functioning” toilets
A woman in India said, ‘every day is a nightmare for us….we have to plan every night, before we go to bed, where shall we go tomorrow to attend the nature’s call! Many a times we have to simply ‘control’ our urge to ‘defecate’ and postpone it till the night falls’.
Having to defecate openly infringes on human safety and dignity. This holds particularly true for women and girls, who lose their privacy and have to face humiliation and shame having to defecate in public, or they have to painfully hold their bladder and bowels all day, risking their health by waiting until night falls.

There is also a connection between toilets and violence against women, even though it may not sound obvious. Consider a woman without access to a toilet in her home. When travelling to and from public toilets or venturing from her home to defecate openly, mostly at night, she is vulnerable to violence. Reports of attacks or harassment of women near or in toilet facilities, as well as in areas where women defecate openly, are not uncommon. Many of us might remember the two young girls from Uttar Pradesh State in India, who were raped and murdered in early this year, while on their way to attend nature’s call. While poor access to toilets is not the cause of violence against women, it can increase a women’s vulnerability to violence.
Not having access to a safe toilet and adequate sanitation facilities affect the children most! 4,000 children die every day due to water borne diseases such as diarrhoea and Cholera – more deaths than HIV /AIDS, Malaria and Measles combined. These diseases are completely preventable.

Rev Sandy Boyce is a Uniting Church in Australia Minister (Deacon). This blog may be a help to people planning worship services.
View all posts by admin →
This entry was posted in World Toilet Day. Bookmark the permalink.